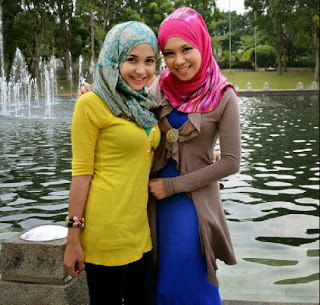 I'm usually fast at writing my post but this time I'm stuck. No words can reveal my frustration about what has been happening. I scroll through my facebook wall and I just couldn't bear all the fitnahs that have been going. I'm crying inside. Very loud. Trying my best not to curse out-loud during this holy month. People are talking as if they knew everything. I can't even believe some of them are actually my friends. I can't blame them. They don't know the real story. So they have the right to talk?? To post whatever they want? Even things that are damaging to people involved?

As most of you have known or heard of it's the very famous story of the school that 'forced' non-muslims to eat in the TOILET. Oh my goodness for the sake of your religions and beliefs it is a CHANGING ROOM to begin with. Now some other people don't even care to know the difference. They ARE DIFFERENT! And do you even know the condition of the place to say that it's dirty, not hygienic and whatnot? You're not even there. Why are you rubbing salt to the wounds? Do you really not know, heard or even care about RACIAL SENSITIVITY? If you do why is there only non-muslims in that photo even though muslim students ARE ASKED to do the same if they aren't fasting. They are not given extra treatment, to eat in a luxurious dining hall. They are all treated equally. Just the fact that there are more non-muslims who aren't fasting makes it a bigger deal. Do you see what I see now?

I'm very deeply wounded by this and ESPECIALLY WOUNDED because it's my dad who is involved in this matter. Yes it's my freaking DAD. He is the headmaster of the school and only God knows how many times I have rethink about posting this on my wall but things have gotten too serious for what it's worth and I can't help but to do something, at least by doing this. Who am I again? Who are going to read my post? I'm just like any other medical student studying overseas under the blessings of duit rakyat, and temporarily back in Malaysia for summer holiday, hoping to spend a good time with my family, but now this?

My dad is the most motivated headmaster I've ever met and yes you may think I say this out of bias as a daughter but hey aren't your dad the best dad in the whole world for you? I know my dad so well. He may be a person who is inclined to support the government, but he will NEVER abuses his power to do anything like has been accused by some irresponsible parties. He comes back everyday from work boasting about his school's potential. About how the kids have grown better in both academics and co-curiculums. He never stops asking me and my brother questions about how to improve his school. Urging us to go to his school to give out speeches to motivate the students to reach out for their dreams. To become role models to the society and do not let the society ruins you no matter what. Ironic enough, it's the society who ruined him.

What makes things worse is people keep on posting bad things about my dad, even attacking his posts he's made in the past that I need to deactivate his facebook for a while to protect him from those horrendous comments and threatening messages that he didn't even know about.

Please people, if you still have the slightest bit of humanity stop the fitnah. Do you not fear of the consequences of spreading fitnah? Do you not fear of God's punishment? I'm writing crying my heart out with the intention of being able to reach out to your decent hearts, please STOP! In the name of Allah, in the name of God, please, PUTTING ASIDE WHICH POLITICAL PARTIES YOU'RE ON, just think of me from a perspective of a daughter who cares about her dad. I'm sure you all know how I feel. If you think I'm writing this to gain sympathy, you're damn right I am. If that's the least that I can do for my dad.

FYI, because of your ruthless thought Mr. Author, my dad is now with the police, to be investigated. Seriously is my dad really that bad of a person? I think it's enough for me not to agree with that. And I'm sure all of the people who truly knows him would be on my side. Tabahkan hati Farah. InsyaAllah Allah bersama org teraniaya. The truth will be revealed. I'm praying hard for that. And I believe those who are my friends are with me. No matter what your skin colour or beliefs. People who knows me knows me well and I believe in them and those who don't, don't even bother to stalk my life finding faults in mine. Cause I'm sure some of you have done that to my dad. May God guide your life. You can read the post in the picture if you would even bother.