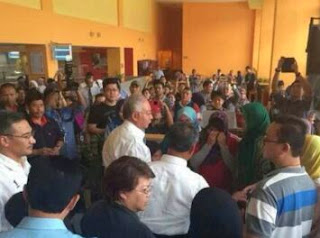 The Western Media, including CNN, BBC, ABC, CBS and NBC, have been broadcasting again and again, almost in loop tape fashion, the near riot in the MH370 media briefing room yesterday. Malaysia's portrayal as a villainous state, with evil officials hoarding information and telling untruths with impunity is now complete.

Malaysia bashing is on overdrive !

NOW, while the world is gripped by the possible discovery of MH370 debris in the southern Indian Ocean, let me state something:-

NO country has a monopoly on grief.

Malaysia lost 50 of its citizens. These are fathers, wives, siblings and children of quietly grieving families across our land. Indonesia lost seven people, Australia six, India five, with others spread over 11 other countries and territories.

The Western Media is focusing almost exclusively on families of Chinese passengers, almost reveling in the dramatic expressions of sorrow and anger by these people. These unbridled emotions have long degenerated into bouts of Malaysia-bashing, with wild and outrageous accusations thrown at our officials and our nation by what has became a rude, noisy, unreasonable and hostile mob bent on venting their personal frustrations at something, somewhere, somehow.

And Malaysia became this punching bag.

While a little "thank you for your concern, support and hospitality" may be beyond these guests of Malaysia Airlines, we didn't expect a noisy demo in the media briefing hall either. And not least the Malaysia-bashing banner which read: "We protest against the Malaysian government withholding information and wasting time and hampering search efforts."

NOW . . . you people know what happens if you do THIS in your homeland, China? Yes, I'm sure you do.

As for the Western Media, the LA Times quoted a typical line — with the same flavor repeated again and again among their compadres — this time purportedly by a grieving family member in Beijing:-

"I'm angry at Malaysia for not telling the truth. From the start they were buying time, withholding facts, and now they're distorting the truth.'"

What then do you call the media briefings of the 12 days? Pack of lies by Malaysia? Untruth? Buying time? Withholding facts?

So what "truth" do you want?

That the plane crashed? No, you won't accept it. The plane was hijacked? No also. The plane landed somewhere? Again No. The plane is lost and will NEVER be found? A big No No.

So what is "truth" then?

The truth is — until about a couple of hours ago with the Australian preliminary interpretation of the commercial satellite imagery — NOBODY KNOWS. Not Malaysia, not China, not America, nobody knows. That's why everyone and his uncle from almost 30 countries plus millions online worldwide have been searching millions of square km of land and the deep blue ocean.

Sure, I sympathize with your grief. But again, others lost their loved ones too and suffer from the same uncertainty as well. I repeat, Malaysia lost 50 passengers and crew, including some of our best and brightest. And passengers from 13 other countries and territories were also on that flight and suffered the exact same fate as your loved ones. BUT I don't see Malaysians, Indonesians, Australians, Indians or Americans go berserk and throw bottles at Malaysia Airlines staffers and verbally abuse caregivers.

Did grieving Malaysian next-of-kin throw bottles and spit at your embassy officials and representatives in KL over the irrelevant satellite image furnished in the name of your government, which led to the deployment of our SAR assets in the middle of the South China Sea to unravel a lead that turned out to be a sick prank among many untruths and distortions spewed by your country's social media?

So why must only you people display this unbridled anger and frustration over something beyond the control of anyone, any airline, any search party, any national leader, any country, even the planet itself?

My message to these people: there is something called Compassion Fatigue. Your antics in Beijing and KLIA beamed over the global media has pushed many genuinely caring Malaysians towards this state of mind.

AND to the Western Media, remember, there are 239 souls on MH370, not just 152. The world has witnessed the antics of the families of the 152. Why don't you people now focus on the other 87 families who by and large handled this very difficult times with dignity underlain by brave acceptance of God's will.


Sent by Maxis from my BlackBerry® smartphone